The Mary Bryant Home is here to assist our visually impaired residents with their daily lives, offering a safe and secure place they call home.  As the first supportive living community in the state of Illinois, our facility is designed specifically for blind and visually impaired residents to meet the needs of living lives of independence.  Centrally located in Springfield, the Mary Bryant Home is staffed around the clock to assist our residents, and we offer a wide range of activities daily for residents to enjoy.

The History of the Mary Bryant Home

The Life of Mary Bryant

Mary Bryant was born August 24, 1854 in Cook County, Illinois.  Mary was a healthy girl with excellent vision until the age of 9 when she contracted scrofula—a disease which affects the lymphatic system and is a precursor to tuberculosis.  The illness took much of Mary’s vision.  As it was a difficult task for a family to care for and educate a child with little to no vision, Mary was fortunate to live in Illinois where the state created the Illinois Institution for the Education of the Blind in Jacksonville, Illinois.  At age 14, Mary’s name first appeared on the school’s roster.  Little is known about her life at the school except that in 1869, a fire broke out at the school.  Capable of distinguishing dark from light, Mary was able to evacuate the completely blind students in the school, thus saving many lives. 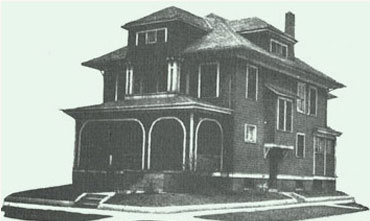 The first Mary Bryant Home located at 4th and Scarritt in Springfield, Illinois

Mary completed her education and graduated in 1878.  Superintendent Dr. Joshua Rhoads stated, “Mary Bryant graduated with credit to herself and honor to the institution.  She is prepared to teach music and as such, is recommended to the public.”  The school Mary attended is still in operation today in Jacksonville, and has since been renamed as the Illinois School for the Visually Impaired (ISVI).

The Illinois Institution for the Education of the Blind employed Mary Bryant from 1892 until her death in 1921.  Her salary would never go higher than $10 a month, but she would faithfully put money into her savings account every month.  Mary passed away in the school’s hospital on January 11, 1921 and her ashes were laid to rest in Jacksonville Cemetery.

By living modestly, she managed to save $3,589.83—the equivalent of $43,770 today.  Mary requested that a safe home for blind women be created with her endowment.  From 1921 to 1945, the alumni of her school began raising funds to make Mary Bryant’s dream a reality.  It took nearly a quarter century before The Mary Bryant Home Association was formed and the first home was established.

The third Home was located at 5th and Allen

The Mary Bryant Home for the Blind opened in June 1946, as the first safe haven for blind adult women, located at 1001 South Fourth Street in Springfield, Illinois.  The home was able to comfortably house 7 women and provide safety for the residents, just as Mary Bryant had wanted.  It did not take long before more room was needed, and in 1948, the association purchased a new home at 107 East Lawrence Street in Springfield, which could house 20 women.  This home provided room for growth as well as new services for residents.  In 1950, the association formed an infirmary fund to offer nursing services to the residents.

In 1960, there was a need for more space and a proposal was made to accept male residents.  With the help of a local philanthropic group, The Twenty-Five Club, funds were raised to purchase, renovate, and equip a beautiful stone residence at 1100 South Fifth Street that comfortably accommodated both blind men and women for 23 years.

Planning for the current Mary Bryant Home began in 1980, determining that building it from the ground up would allow the administrators to design a home which put a great deal of emphasis on the resident’s safety and daily needs.  Property was purchased at 2960 Stanton Street in Springfield and construction was completed in 1983.  The 26,000 square foot building first opened as a shelter care facility licensed under the Department of Public Health and operated as such until 2004.  Renovations to make the Mary Bryant Home a supportive living community began in 2002 and were completed in 2004 to incorporate more of an apartment style of living for its blind and visually impaired residents.  The staff at the Mary Bryant Home and its Board of Trustees continue to strive towards Mary Bryant’s dream of bringing comfort and safety to its visually impaired residents as they maintain their own independence.